During the past two weeks, we have been using Desmos as a class and independently in order to establish an understating of how parabolas transform and how we can use our knowledge to manipulate its figure. Within these last two weeks we have completed 5 activities. As we progressed through the activities the lessons became more challenging and gave us a clearer way to view the parabolas, their equations, and how they move on graphs.
​Activity 1
Activity 2 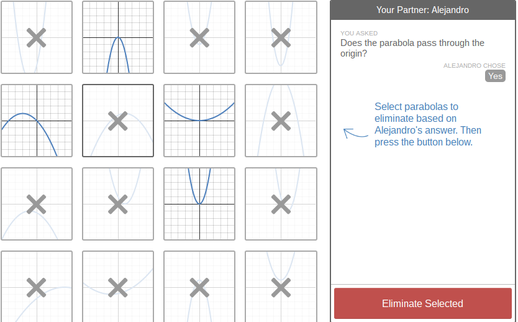 Once we had a better sense of what makes up a parabola and learned the basic terminology we were randomly paired up to play "guess who" with different parabolas. How the game was played is simple, Desmos would pair us with someone in the class, one student would ask yes or no questions to try to eliminate the parabolas the other player did not select. The more questions asked, the less parabolas you're left with to eliminate in order to find the correct parabola.

Doing this activity pushed me to describe parabolas and use new vocabulary.
​Activity 3
Activity 4
For this activity I learned how to manipulate equations in order to change the parabola form. This included changing the equation in order for it to widen or narrow the parabola and move its vertex left or right or up and down.
In the second image above, the equation is y=0.335(x+6)^2+1. My goal was to have the parabola align with the already placed coordinates by manipulating the equation.
​Activity 5
Desmos, for it being (I'm assuming) a free site, is a good learning tool that is clear and easy to understand. Not only has it made sure that I understood everything that was presented to me, it is also a fun activity to have in class. If I had one suggestion it would be to have Desmos work for pairs of students or groups. The independent work went well but I feel if we tried to find solutions as a group we'd have different ways to look at the problem and come to faster conclusions.

Self Evaluation
While working on Desmos I believe that I did very well. I stayed on task for the most part, finished the given activities, asked my group and the teachers questions, helped others, and when asked to explain my thinking process I articulated my findings to the teachers and the class. When it comes to grading I deserve an A.
My goals for the rest of this semester is to find a spot in mathematics that challenges me but does not overwhelm me or confuse what I already know.

Things I Learned
Seven things I learned from using Desmos are;
- the basic parabola vocabulary: knowing words such as VERTEX, INTERCEPT, and CONCAVE UP/DOWN go a long way when working in groups. Being able to share your ideas/solutions clearly is important, doing so not only will help the group come to a solution, it will also help you understand what is being presented and how to make sense of it.
- what makes an equation form a parabola when represented on a graph: although (x^2) may seem like a basic concept it helped me learn what X meant on a graph and how it will be put into equations with a,h, and k.
- how to manipulate equations (thinner/wider, left/right): despite making equations longer and "complicating" them makes me nervous, understanding the reason why it worked that way in order to change the shape of the parabola helped.

​Edits
After completing the first draft to this Desmos write up I had two of my classmates critique this page. One critique I received was having to open up and decribe the struggles I faced while using Desmos and working with my peers.